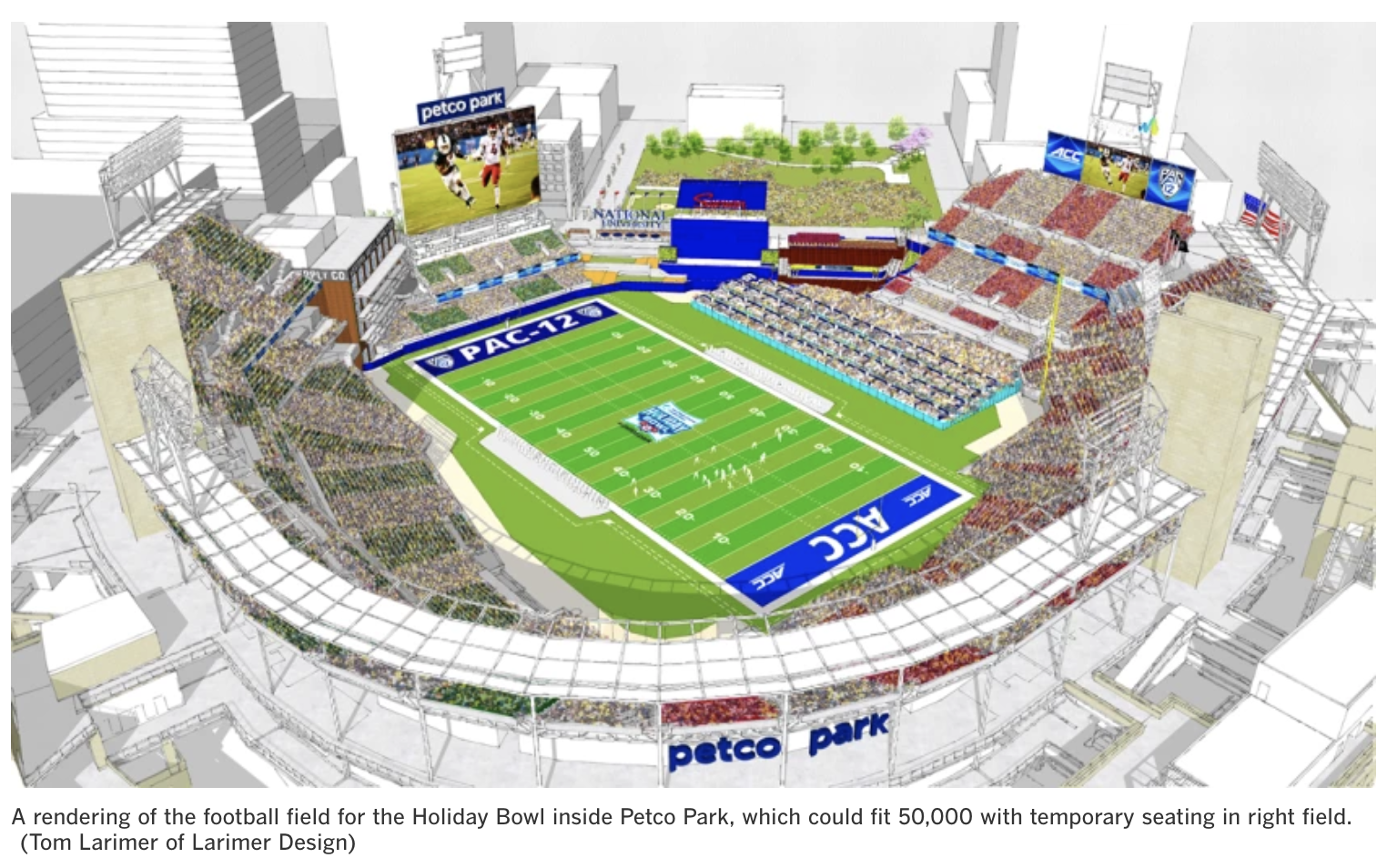 Where the heck was this idea when we were trying to keep the Chargers.

This week: the weekly snapshot plus a look into the building momentum of the iBuying wave.

Ok…full disclosure, something weird happened with the SDAR weekly data.

Last week the active inventory number shot up by roughly 2,000 in one week (from 3,535 to 5,316) without any bit of explanation. I thought it was just a typo. Apparently, it wasn’t because this week SDAR reported a similar number.

I’ve reached out for clarification but they’ve yet to respond. Hopefully, I’ll have a better explanation for next week. For now, I’ve restarted the 4-week average to remove the skew.

If you ask me, this is a bigger deal than it may seem.

Here’s a snippet from my June round-up from a couple of weeks ago:

Over the next 6-18 months:
Assuming no new variable or government intervention is thrown into the equation, I wholeheartedly expect prices to hit some sort of ceiling, marketing times to increase, and prices to bounce lower for a period until we find equilibrium.
That doesn’t mean a crash, it just means a slight pullback that is normal when the tides of the market shift from sellers to buyers (just like any other asset class).

This graph from Black Knight does a good job showcasing what’s typical. The red circle is my addition. 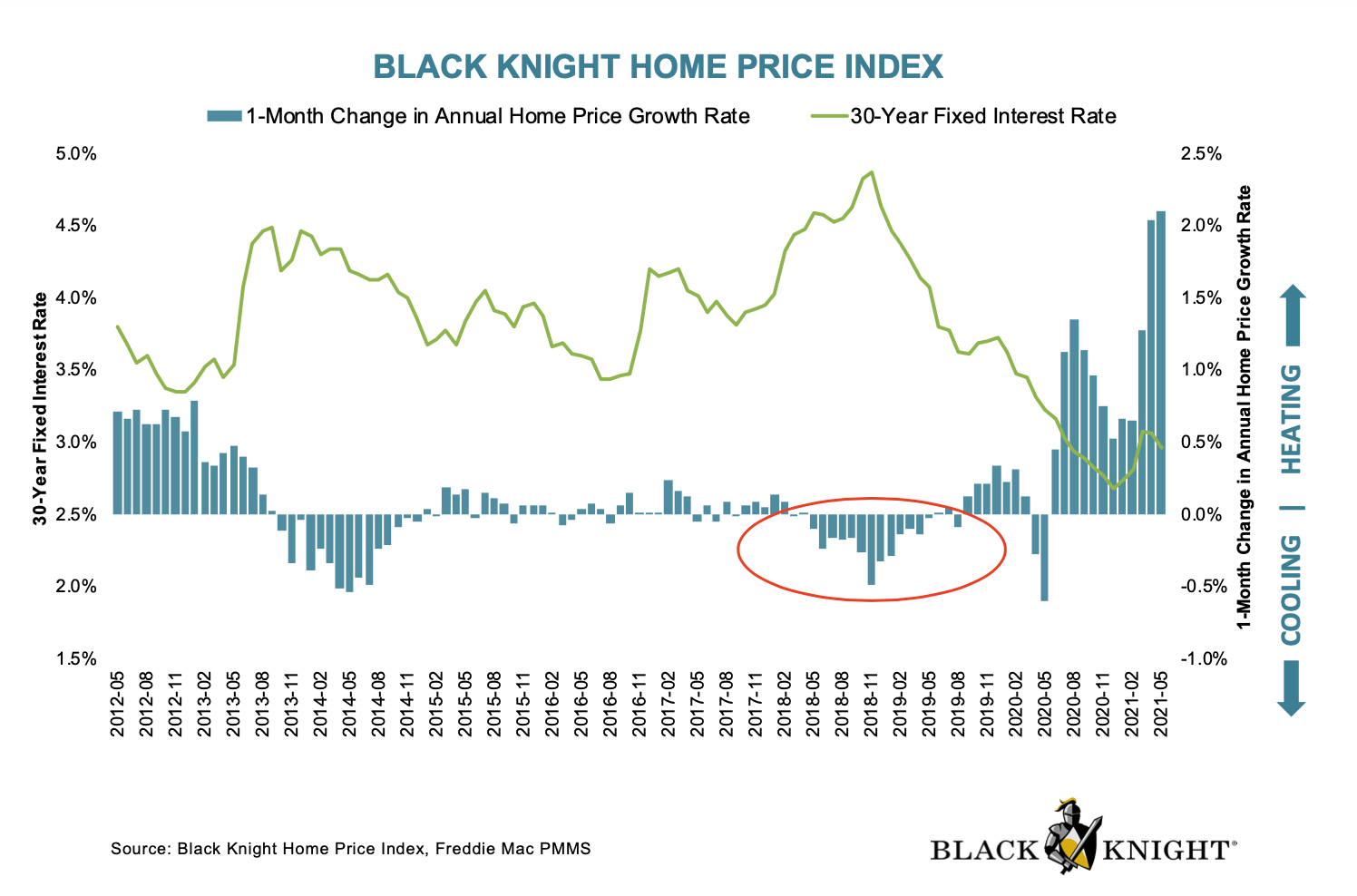 This period in 2018 wasn’t a crash. It was a softening and pullback driven by a slowing of demand as interest rates rose.

As I mentioned above, San Diego’s inventory of available homes for sale during that period climbed to over 15,000 – we’re still less than 1/4 of that so we have a ways to go.

That said, my hunch tells me with prices as high as they are, there are fewer buyers that qualify to purchase now compared to then, so I think we’ll start to feel the pullback well before we get to 15,000 inventory.

I’ll be watching the data closely. I’m already penciling in longer hold times for properties we are buying now. I’m also expecting to factor in minimal price depreciation into our proformas if inventory levels creep above 7,000 and mortgage rates start going up again.”

If this adjustment by SDAR turns out to be accurate, then we just cut the gap to 7,000 active inventory in half….something I expected to take several months. Mortgage rates have dropped significantly so that helps.

Assuming rates do rise again (which is looking unlikely at least before the end of summer), whether or not this arbitrary 7,000 inventory level means anything is yet to be seen. I admit it’s a VERY conservative line in the sand. I personally prefer it that way due to the riskier nature of the value-add projects we take on. We may actually not feel any difference until 10,000-15,000 inventory. Only time will tell.

If you happen to have the inside scoop on what the heck SDAR did with their data I’d love to hear from you! Please reply to this email if you feel so inclined. ?

NEWS FLASH: The iBuying Fad is Not a Fad

We got a flood of news and reports from the iBuying world last week. Since I play in this space, I always pay close attention.

I’ve been saying this for a while. We live in an AMAZON-inspired world. We have been trained (yes…like a dog to a dinner bell) to want things now and with little effort. This is why this wave of iBuying is not a fad…it’s a trend driven by POWERFUL consumer demand that was only made stronger by COVID.

Last week, Inman.com released an article that absolutely smashed the dreams of anyone hoping iBuyers would go away.

In a survey of over 600 homeowners across the country over the age of 25, over 70% found the traditional sales process stressful.

And over 80% said they would respond positively to the typical iBuyer pitch of selling fast with little hassle.

There’s a bunch of other gems in the article – I recommend the read if you can get it.

Here’s the point – the iBuyer model works in an up AND down market as long as consumers still want it (which they will)…iBuyers only need to adjust their buying formulas with the changing tides. So, to put it simply, get used to them being around (and growing).

Why does this matter?

If you’re a real estate professional, you better find out how to latch onto this trend before it’s too late. For example, if you’re a real estate agent you really need to find a way to be able to offer this iBuying solution without your own suite of solutions. Reach out to me if you want to chat further.

If you’re a real estate investor dealing with sellers, the size of the market is growing but so is your competition. Start focusing more of your attention on serving the consumer (the seller) or you’ll quickly become irrelevant. Big tech is brilliant at this (as are other smart companies), they have an endless supply of money, and they are educating your customers on what to expect. What they don’t have is a personal presence in the community and intimate knowledge of the landscape – so you still have an advantage they can’t touch. That said, whoever serves the consumer best, wins.

If you’re a property owner, selling quickly for cash is not a “fool’s strategy” any longer. It’s also not right for everyone. Don’t listen to just one perspective. Talk to a professional that can guide you through the seemingly limitless options you have in today’s rapidly changing real estate world.