WORD OF CAUTION – if you’re a buyer or working with a buyer and you are lucky enough to snag a property right now, I’d recommend having all your ducks in a row and making it VERY easy on the seller. You’re going to have a dozen (very desperate) buyers right behind you, just waiting for you to screw up.

Case in point for a real-life example, we just had a property fall out of escrow because the buyer didn’t perform on time (twice). Normally we’d have more patience, but the communication from the other side was awful and we had options. Five days later we’re under contract for $50,000 more.

For months now we’ve been predicting (along with a lot of other, much smarter people than me) higher mortgage rates. This Omicron variant has the potential to throw a wrench in all those predictions.

Why? Because it’s unexpected. The bond market is full of a lot of SMART people that are basically paid to make bets on the future. It is VERY good about pricing in expected trends. As a result, things get a little wonky when a new, unexpected variable is thrown in the mix.

Prior to last week, the bond market was all but sure inflation was going to stick around for a while and the Fed would be forced to raise interest rates sooner rather than later.

Today, bond investors are a lot less clear about the future, and mortgage rates decreased (drastically), erasing a week of rate increases in a matter of hours. 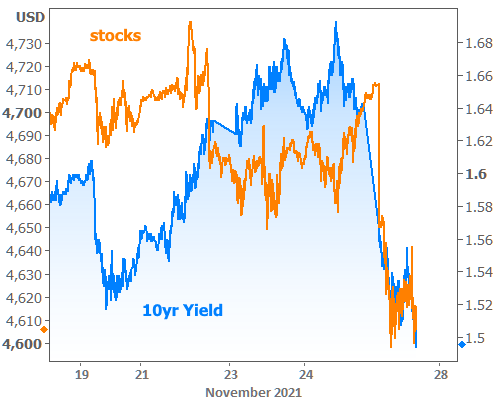 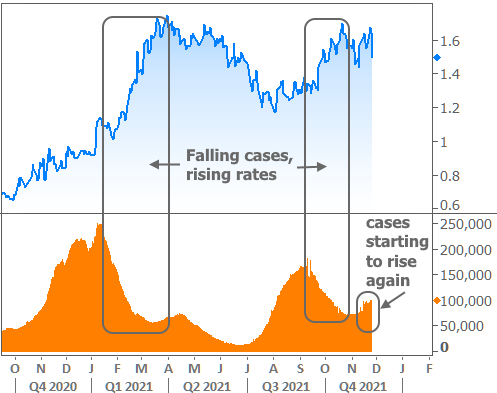 If it turns out to be a false alarm, then rates would likely reverse course back to the higher side relatively quickly.

If it turns out to be Delta 2.0, well then we could be in for another long ride lower (for rates) until the country figures out how to beat it back again.

Another ride lower for rates would only add fuel to the fire of the coming multiple offer frenzy I’m expecting in Q1.

In The News
The Week Ahead